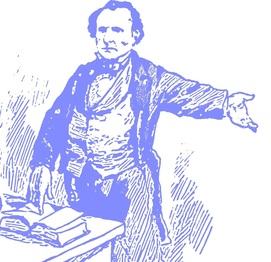 The pervading influence of puritanism was abounding in post-colonial America. Graham, a sickly Presbyterian minister from Connecticut, delivered Sunday sermons and dietary dogma from the same pulpit. To him and his followers, the Grahamites, the pleasures of the flesh and palate were one in the same.


Sly was ahead of the curve, advocating abstinence from alcohol, meat, sugar, processed grain and high-fat foods. He had the foresight to recognize that tobacco would kill you 130 years before the US Surgeon General. In America, historians attribute the institution of both teeth brushing and regular bathing to the influence of Graham and his followers.


Aside from much health reformation implemented by Graham, his dietary and religious ideologies were so inextricably linked that he blamed meat, salt, and sugar consumption for adultery, homosexuality, and unwed pregnancy. He also encouraged parishioners to marry young to get the desire out of their bodies and claimed that unsatiated sexual urge was “poison”. At the same time, Graham openly condemned masturbation as “self-abuse”, claiming that its “victims” were shy, devious creatures easily identified by their “ulcerous sores, (which) in some cases, break out upon the head, breast, back and thighs; and these sometimes enlarge into permanent fistulas, of a cancerous character, and continue, perhaps for years, to discharge great quantities of foetid, loathsome pus; and not unfrequently terminate in death.” In other words, acne.


Graham is best known for lending his name to the Graham cracker which was made from the unbleached, whole-ground wheat flour he invented (although Graham would likely disapprove of the cookie-like treat we eat today).  Also, his influence on Seventh Day Adventist Church founder, Ellen G. White, along with its adherent cereal kingpin, J.H. Kellogg.
John Harvey Kellogg 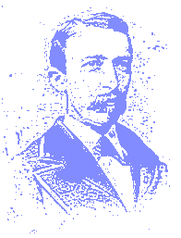 Dr. Kellogg was a disciple of Sylvester Graham’s and the director of the Seventh Day Adventist-run Battle Creek Sanitarium (think health resort, not mental hospital) in Battle Creek, Michigan.


Kellogg accidentally invented the ready-to-eat breakfast cereal market when he and his brother overcooked a batch of wheat mush attempting to duplicate Granüla, a recipe they’d stolen from another sanitarium. They served their flaked corn, wheat, rice, and oat cereals to patrons, but didn’t decide to market them until one of those patrons (C.W. Post) started amassing a fortune from the recipes he blatantly jacked from the Kelloggs.

Like Sylvester Graham, Kellogg was a staunch vegetarian and teetotaler who espoused a low-fat diet, free from processed foods. Unlike Graham he believed in yogurt enemas and complete sexual abstinence, claiming that his 40 year marriage to wife, Ella, was never consummated.

Kellogg touted the merits of Eugenics, which was popular among white, well-to-do persons of the Victorian Era. He founded the Racial Betterment Foundation which, through a convoluted interpretation of Darwin, campaigned for the “segregation and sterilization of defectives” which were blacks, immigrants, handicapped people…. Basically, anyone who did not look and behave like John Harvey and his rich pals.

A hundred years and billions of dollars later, Kellogg’s is the world’s top provider of breakfast food and ironically, given their beginnings, the world’s second largest snack food purveyor. According to a recent Yale study, Kellogg’s products and products like theirs are one of the world’s leading causes of obesity. Not surprisingly, John Harvey’s wacky beliefs (even the good ones) are absent from Kellogg’s corporate history which fails to mention vegetarianism, race, religion, abstinence, yogurt enemas, clitorectomies….the principles and practices the company was founded on. If you visit their website they even display a variety of smiling “defectives” enjoying their products. 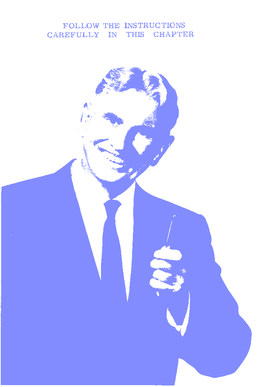 
Paul Bragg was a YMCA instructor who founded a popular Los Angeles health center in the 1920’s. He toured the country lecturing on the importance of water consumption, fasting, organic foods, juicing, etc. Many of the values held by modern natural health advocates have a direct connection to Bragg and his teachings. He was Clint Eastwood’s nutritionist and Jack LaLane’s mentor.


Bragg was a living endorsement of his own programs. He looked and behaved much younger than was typical of men in their 40s. He would publicly perform feats of strength and defeat men ten years his junior in wrestling matches to the oohs and ahhs of thousands of potential customers. Besides diet and exercise, Bragg had an advantage in attaining the vigor and strength of a twenty-year old, he was one.. . 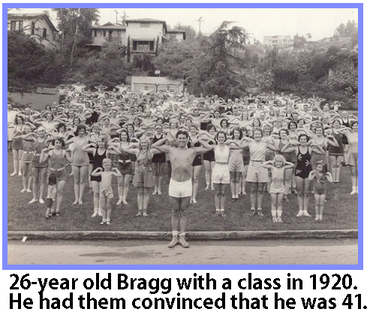 Bragg tacked fifteen years on to his age, then convinced devotees en masse that his healthy lifestyle could help them live life as a stronger, healthier and better-looking person. He also billed himself on his literature and products as “Dr. Paul C. Bragg - Life Extension Specialist”, though Paul has never mentioned an alma mater and there is no record of him having attended school past his first year of high school.


Although his birth records eventually surfaced, Bragg maintained his age and doctorhood until the very end. In a People magazine article in 1976, the interviewer asks, “How old are you when sex is gone?” To which Bragg pithily retorts, “You'll have to ask someone else. I'm only 94." He was actually 80 and he died the following year, at 81, which was merely four years past the average American life expectancy of the time.