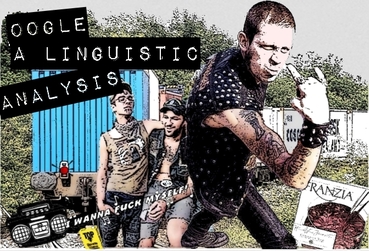 A linguistic analysis
by Juicy Karkass
from OG#3


Oogle – noun
1.) an inexperienced or inauthentic homeless youth, a “weekend warrior.”
2.) a transient punk rocker.
“I know that oogle. His wingnut girlfriend wanted to trade me that janky crackbox for a spacebag and I told ‘em both to kick rocks.”

“Is that the same oogle who was riding dirty-face all swilly on Thunder-Chicken and almost fell off the grainer porch? I heard the bulls ended up dragging him off a piggyback and he had to spange up to ride the shame train.”

“Yeah that’s the same oogle. We shared a half-rack of tall boys with him and he passed out next to some homebum. I taxed his smiley and his church key. I had ground-scored a Sharpie earlier so we elfed him good.”

Crusties have accumulated a good amount of slang, the majority of which can also be found in the vernacular of other transient alcoholics. “Dirty-face” and “piggyback” belong to anyone who rides the rails; every alcoholic is familiar with “church keys” and “tall boys”. Your garden variety transient can talk about “ground-scores” and “kick-downs.” You don’t have to be crusty to talk like this. But there is one slang term that belongs exclusively to crusties. That word is “oogle”.

In the 90’s, oogle was a word that crusties used to insult younger, inexperienced punk kids. Most crusties boast about everywhere they’ve been, showing off their knowledge of highways, train yards and railroad lines. Teenage runaways who linger in one town, instead of traveling extensively, are at high risk of being labeled as oogles. Crusties put back lethal amounts of alcohol, while oogles can’t hold their liquor. Crusties love shit like Burzum, GG Allin, and Merle Haggard. But oogles love My Chemical Romance, Less Than Jake, and all manner of Juggalo shit. Crusties are filthy; oogles’ clothes are suspiciously clean. Crusties are resigned to a nomadic life of poverty; oogles are pampered posers. In the land of crusties, oogles are tourists.

After perhaps a decade, something funny started happening: oogle became a victim of semantic drift. It’s difficult to pinpoint when it began, but as early as 2004, punks were using the word “oogle” to refer to crusties. It’s easy to see the logic behind the shift: crusties are basically drunken, nomadic versions of the standard punk rocker, and oogles are just inept pseudo-crusties. Many punk rockers viewed crusties as drug-addicted, bug-infested scumbags – in effect, inept pseudo-punks – and thus the crusties came to be viewed as oogles.

But this wasn’t the final twist. Rather than be insulted by being called oogles, crusties began to embrace the term in much the same way that the original punks of the 70’s had embraced a label that was originally intended as an insult. Linguists call this process “reappropriation.” Words that are reclaimed in this way often acquire positive meaning within the in-group, but are still considered offensive when used by outsiders. Think of queer, geek, and redneck, to pick just a few examples. Sometimes, such “reclaimed” usage can still be controversial among members of the in- group; some transgender people are uncomfortable with reappropriating the word “tranny”, and many African Americans disapprove of the reclaimed usage of the ever-controversial word “nigger.”

When discussing the style and register surrounding “oogle,” things get tricky for two reasons. The first is because it’s practically imperative to be a punk or a crusty oneself, in order to know whether the speaker is using the term in its original or its more recent sense. The second reason is because the term is not a part of formal speech by any stretch of the imagination, and yet using “oogle” in either sense – either as an insult or a badge of membership – still conveys the speaker’s prestige and status. Regardless, the word is unlikely to be used much in the presence of those who are oblivious to its meaning. Any speaker who cares about being understood will try to avoid words that are unfamiliar to the listener. For this reason, “oogle” is unlikely to ever be used by anyone outside the punk scene. In the classroom or at the job site, other words are needed to describe oogles. It is an effective and descriptive shorthand for those who understand its nuances, but in order to convey the intended meaning to the uninitiated, it will be necessary to employ synonyms like “poser,” “junkie,” or “vagabond.”

The etymology of oogle is unclear. Some speculate that it is related to the verb “to ogle”, but there is little evidence for this speculation. For one thing, it is unclear whether oogles would be the oglers or the ones being ogled. The phonetic similarity to nouns like “goggle” and “squiggle” – whether etymologically relevant or not – may lead some to speculate that oogle is represented in the speakers' heads as a root “oog” with the suffix “-le”. Yet, these can hardly be thought of as separate morphemes, since they have virtually no distinct meaning on their own.

Oogle is a free morpheme with the slangier and slightly less common clipped form, “oog”. It is primarily a noun, and can take many complement options, such as the preposition “from” in the phrase, “the oogle from Chattanooga.” Predictably, both oogle and oog take the plural -s marker. The only other affix is the adjectival -y suffix, which can produce the adjective “oogly” (but not “oogy”), meaning “resembling or having the characteristics of an oogle.” Oogle and oog can both be used as verbs, albeit rarely. This conversion from noun to verb has its syntactic constraints: oogle (or oog) can only be used as a verb when followed by certain complements, usually a preposition (“I’m tired of oogin’ around”) or a direct object pronoun and a preposition (“we were oogin’ it up last summer”). Such constructions are even slangier than the original noun, and still fairly uncommon. The use of oogle as an intransitive verb is quite rare, although constructions such as “every day I’m ooglin’” are not implausible. The use of oogle as a transitive verb is virtually unattested; nobody would ever say, “I oogled a stranger over the weekend,” (but it’s amusing to speculate about what that might mean).

It can be a little confusing to try to figure out just what is meant by the word “oogle.” Even those who use it constantly and confidently can bicker about what it really means. Luckily for most people, there’s little chance that they will ever have to worry about the definition of oogle. And besides, anyone in an oogle’s vicinity probably has bigger problems to worry about.

Mr. Karkass can be reached at jessemarkus@gmail.com
Organ Grinder Magazine